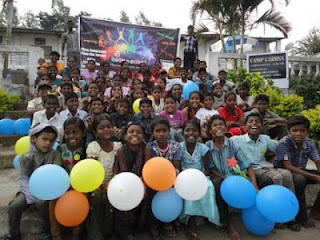 We at Buds of Christ are thrilled and excited with the sweet memories of the smiles and joy that was brought into the lives of 42 children who have been part of the Buds n Colors camp held at yercaud from 22nd to 25th may 2012.

The camp was a residential camp to reflect oneself more deeply and understanding the special qualities in each one. Though the camp started with many young children crying leaving their caretakers for the first time, it became a place of joy that no child has ever experienced in their lives so far. 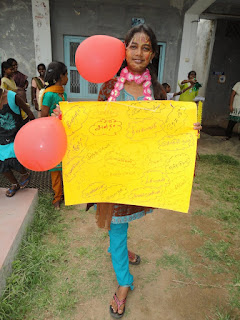 For many campers, this has been the first time experience of being together, getting related to one another and being in the company of one another, thus building a relationship of being part of one big family. The support the older campers gave to the younger ones, in giving them a bath, grooming the smaller campers and ensuring their safety was something that just was brought in without anybody teaching or instructing them.

The songs, dance and value based reflections was the most enjoyable moment for the campers in instilling the spirit of joy and building trust among one another. It even thrilled us in seeing the shyest ones waving their hands and dancing to the songs, as their peers coaxed them to join.

The carnival time, the camp fire and the stage night were events that helped the campers the volunteers to exhibit their creativity and reasoning skills. These events proved to be another milestone to many campers who have not presented or even attempted themselves in a big gathering. It was another exciting experience for the organizers to witness the silent ones dancing, playing skits and singing songs. 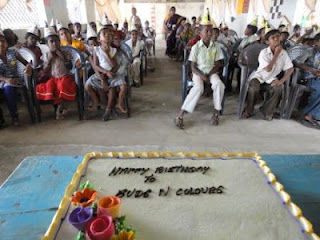 The Group sharing sessions and night reflections revealed how much of verbal and physical challenges, each child has to go through especially children living with grandparent and widows. The sharing though was very emotional brought in a lot of strength among the campers that nobody else can provide. This sharing not only built in strength among the campers ,but even  the guests and trainers to make a commitment not to grieve over the personal  loss but instead share  love and joy  to others

We thank all the contributors who has placed their trust in Buds of Christ in making a difference to the lives of 42 children through Buds n Colors camp.