HIV and AIDS has crossed two decades since its first existence in . Among people living with HIV, young people account the most affected. The impact of HIV has resulted in stigma around the infection, thus affecting people who live with HIV not sparing even the children living with HIV. The stigma of the infection has even restricted many from accessing the right information and has contributed in the increase of HIV infection among young people. In this context, Buds of Christ with support from the District Education Department of Namakkal district organised HIV and AIDS awareness sessions in schools with a focus in reducing stigma and discrimination. 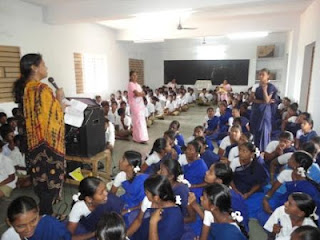 The program was organised in 4 Govt higher secondary schools reaching to over 1500 adolescent girls and boys in Tiruchengode Taluk. The training programme content included assessment of student’s knowledge on HIV and AIDS through quiz completion. This further facilitated interest among the students to raise questions around the topic. Brief discussions around transmission routes, testing procedures, care of people living with HIV were shared.

A movie “emanthitingala“ was screened, that shares the message on how ignorance on knowledge of HIV affects children studying in schools and also extends to inform the audience on how HIV transmits and how it does not and the care we can provide people living with HIV. Following that few minutes were given to students to raise questions around HIV and AIDS through the question box technique. 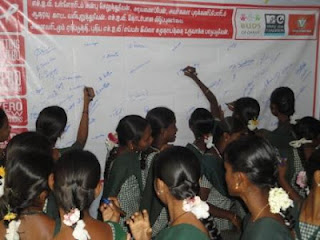 From the questions mobilised, we found that;


There were few questions that revealed the vulnerability found among young people.


Though the training session resulted in a positive response, the need to build in life skills among young people to effectively cope with the vulnerabilities of HIV and AIDS was found as essential. In almost all the schools covered, the headmasters showed great interest in organising such events in helping the young children learn and protect themselves.