As the world celebrates International Women’s Day on March 8th, we at Buds of Christ took this as an opportunity to assess the status of young girls from families affected by HIV and AIDS.

It has been observed that most of the mothers who are currently living with HIV were stopped education at an early age and married as early as 14 years of age. Almost all the women have contracted infections through marriage and many have been widowed at very early shouldering the burden of being bread winners and bringing up their children. In such conditions, the girls from these families are also stopped from studies and married early in easing the burden thus repeating the same situation of the mothers.

Buds of Christ in partnership with Positive Women Network, Chennai organised a program to help women realize the need to prevent girl child marriages and educate girl children. The workshop started with an activity where women were made to realise the vulnerabilities and the struggles a young girls faces if she is married early. This activity also paved way for many of the participants to share their own personal experiences of being married early

“I was married, when I was just 14 years old. I did not even realise what was happening to me; within few months, I became pregnant and was tested and was found HIV positive. Because I was tested Positive first, I was blamed and had to go through many physical and mental struggles until my husband opened about his status”

“I was married when I was 16 years old. Though I was sad I was stopped from school, I was excited I was getting married, but when I was 17 years, my husband became very sick and was tested and found HIV positive.” 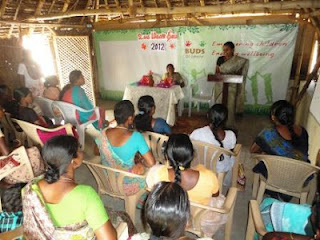 Following this the representative from the District Social Welfare Department Ms. Nagamani shared on the girl child protection and the schemes offered by the government in improving the status of young women. In addition she also shared about the legal actions on child marriage. Then Ms.Amaravathy, representative of Namakkal Positive Women Network shared briefly about PWN+ movement and the efforts they have taken up on issues affecting women living with HIV in namakkal district.

Ms. Julie from Buds of Christ shared the data that 40% of child marriages are happening in India and shared the tough experiences of child marriages among families affected by HIV and AIDS. In addition she also stressed how Life Skills Education can support young girls to be assertive in making wiser choices in life.At the end of the programme, the women members were made to take commitment of educating their girl children and preventing child marriage in their families and their neighbourhood.