Health affected her continuing school; but skills kept her going 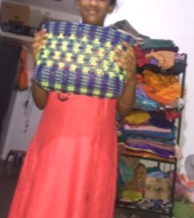 After Priya’s father’s death, her mother started to go for work as a daily wageworker in a snack-manufacturing unit. With the income, the family has been a leading a tough life of meeting the family needs and educational needs of the children. In the end of year 2019, Priya studying in 10th was affected by a viral fever in December and was sick for nearly a month. She was hospitalized and then been at home for more than a month and that affected her attendance to school. In addition, due to hearing problem she was not able to attend the classes properly and found the environment very negative. She was least interested to goto school and always found reasons to be away from school. This worried her mother. At the same time Priya used to enjoy all the group sessions for children at Buds of Christ and always was very active and regular. This surprised her mother and at the same time made her also feel happier about her daughter’s interest with the group. She was very good at making crafts, joining dance and also interacting well with the younger children.
Priya is the second child in the family of three living in a village in Salem district. She lives with her widowed mother and her elder sister. Her father who was a lorry driver passed away 10 years before and she was four years old. Her mother knew about her status, when she was pregnant with Priya, but did not take it very seriously. Though all of them were tested, except her elder sister, they did not start any treatment against HIV. Then after her father’s death, the family was tested again and Priya was very sick and so she was advised for treatment. She used to suffer from Ear infection repeatedly and that caused lesions from her ears. This affected her hearing.
Now during this lock down period, she is enjoying the most, as there is no school. But at the same time, in this time she has been able to show her skill in basket making which she has learnt during these holidays from her mother and is able to make one basket in a day. The basket weaving is fetching an additional income to the family. She has also started taking responsibility in boosting her immunity and her mother and sister’s health by preparing Moringai (drumstick leaves) soup for the whole family every day. She says that “the secret to my health and energy is the Moringai soup” and encourages other children in the neighbourhood to also drink it.
She makes a huge fuss in eating green leafy vegetables, but the leaves in the form of soup have appealed her too. This she had learnt from one of the sessions in the little stars group. The follow-up by phone call by the staff on assessing their knowledge level on nutrition has further motivated her to do it. She now spends her morning time, along with the basket making is teaching small children in the age group of 5 years English and Tamil alphabets.
Her elder sister is handling Maths classes for 10th standard children in the neighborhood, but says “the small children love Priya and listens to her instructions, they write and then play together”. This has also made us, as a team at Buds of Christ to identify the talents and skills within the children who are not able to perform in normal school system, but have inherent skills that would make them productive and independent. Priya is one of the examples we have been able to witness during this lockdown and happy she has found a way to handle the lockdown phase.